My Duke of Edinburgh week at YHA Eskdale 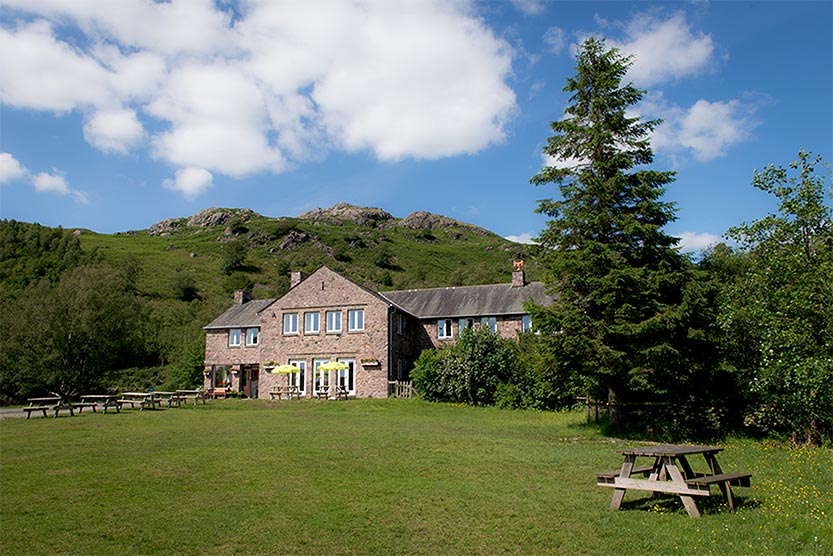 What an early start it was, 5.39am train from London Euston! I can’t remember the last time I was up and out of the house at such a ridiculous time! When I changed trains at Lancaster, it was more of a normal time and there was a little boy who was running along with his little sister saying, “Watch out, Batman coming through”. I had a little chuckle to myself as his little sister then said the same thing. I found it quite funny when I was told that Ravenglass was a request stop – the journey is all part of the adventure though. Two trains, a steam train and a mile walk later I arrived at YHA Eskdale which was to be my home for the next week.

When I arrived, lots of people from a charity called May Day were already there volunteering for the same thing I was. They had come up a day earlier, whereas I was staying an extra day at the end. It didn’t take long to settle in, I was introduced to everyone and given my keys for my bedroom and shown where everything was. I made some lunch and then started painting the dining room with a few other people.

There is no phone service in the hostel, but when you go for a walk up the hills you can get some signal. I didn’t realise until later on, but there was a pay phone there, so I went back into the good old days, picked up the phone and phoned my mum to let her know I got there ok, even though it was hours later.

As I was volunteering for the week, I did not have to pay to stay in the hostel and the cost of food was subsidised down to £2 per meal instead of its normal costs which is good because it saved me carrying loads of food with me and cooking after a hard day’s work. I brought a few things like breakfast and some snacks, but was nice to sit down and enjoy dinner.

On Tuesday we started off with breakfast and then had a briefing so we knew what jobs needed doing. The weather was a bit naff in the morning, but it brightened up later on in the day. I helped paint rooms 10 and 7. Room 7 is the room that I was staying in. After a long day of painting we went for a little walk up the hills, the view was spectacular! I had a nice walk up the mountain with Katie and the dog and I managed to get some signal. After a nice walk, I went back to the hostel and got ready for dinner and then went to the pub. I ordered a J20, but the pub had something similar called Pago which comes in lots of different flavours! I tried the strawberry and then I tried the peach, they add soda water which made it like a fruity juice. After having fun sitting in the pub garden playing on the piano and going around the table and signing a song we walked back to the hostel.

On Wednesday morning I woke up, had my pop tarts, an apple and some coffee and then got straight to work. After painting the dining room on the Monday, I then helped put the books back on the bookshelf. After lunch I went up to the hallway and painted the bottom half of the walls as there was a piece of pine wood dividing the wall. After painting all afternoon we went up for a walk in the mountains and the sun was shining and again I took lots of photos.

I couldn’t believe how fast the week went! Before I knew it, it was Thursday…The morning was a bit dull when we woke up, the clouds and fog were covering the top of the hills. We had some breakfast and started finishing off what we had already started painting yesterday. We were hoping we would be able to get on with some outdoor ground works but maybe another day. Thursday was the last day for everybody who came to volunteer from Mayday and they were going on a little trip to Seascale and asked if I would like to join them. It was great, we set off mid afternoon and enjoyed our ice cream and a walk along the sandy beach. On Thursday evening, the staff at YHA Eskdale held a thank you dinner for us all for our hard work. I would just like to thank Mick, Rachel and Ari who work at YHA Eskdale.

On Friday it was only me and two other volunteers from the painting and ground works party of helpers as the large group had left the previous night. I helped the staff Hoover the entire hostel as the majority of the rooms were now unoccupied. After hoovering with Henry (the Hoover) the weather looked lovely, so I asked Mick if I could spend the day outdoors doing some groundworks. Mick asked me to pull out all of the weeds and place down a sheet and cut around the plants and use rocks as weights so that when the grass grew it didn’t ruin all of the plants that were already growing and also to keep part of the nature trail looking pretty.

Thanks everyone for a great week. This was the final section I needed to complete to gain my Gold Duke of Edinburgh award and I had a lovely week out of the city.