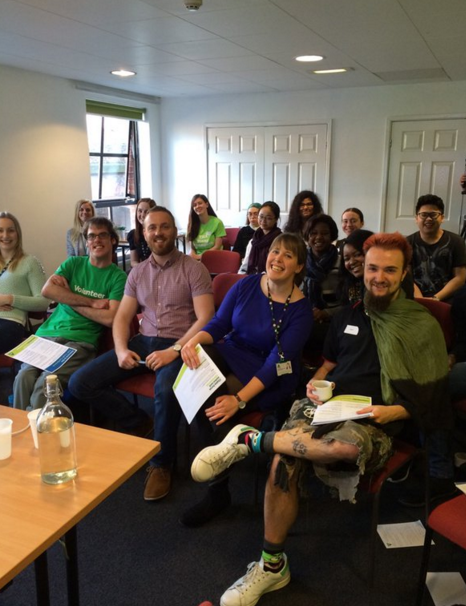 Hi! I’m Emily Dunn, a student at the University of York, a fan of YHA for as long as I can remember, and now a Young Champions volunteer. I’ve had some amazing experiences with YHA, but this was one of the highlights.

Gather together enthusiastic young people, a bunch of Head Office staff, and several platefuls of biscuits, and what do you get? YHA’s Youth Conference!

The event, held in Manchester on 5th March, enabled us to meet like-minded people, have fun and learn more about ways we can get involved. After all, enhancing the lives of one million young people is at the heart of everything YHA does.

But as the chief executive Caroline White explained, this has not always been the case. When she joined in 2008 the organisation had lost sight of what it was all about. It’s therefore great that so much has been done to modernise hostels (WiFi, charging sockets on bunkbeds and en-suite bathrooms!) and that there are events dedicated specifically to younger people.

Unlike Young Champions (formerly Base 25), which began with a massive conference in November 2013, this event was not just for volunteers: it provided a taster of what YHA can offer more generally. For some this afternoon was the first contact they’d had with YHA, and in such an informal, friendly environment it clearly gave them a good first impression.

The organisers had managed to pack a huge variety of talks and activities into just four hours. Even for those of us who’d already volunteered or attended similar conferences, there was not a dull moment. Listening to Laurence, Theodore and Cerys sharing their experiences taught me about opportunities I’d never taken: leading groups of children at summer camps, cleaning blinds at Spanish youth hostel, volunteering at a remote Lake District hostel as part of a gap year, and of course the long-awaited presentation of how last summer’s Intercultural Youth Exchange went.

It was more than sitting listening to others speak, though. The Digital team had us filming our own video clips inspired by YHA’s “Hostelling Hacks” video – search #hostelhacks to see some of the best attempts!

We also got creative in the session run by Lee and Holly from Recruitment: suggesting which transferable skills various celebrities could offer to YHA roles, then competing in the egg drop challenge. We were given a load of straws, some card and a limited amount of sellotape, and told to make something to put an egg inside so that it wouldn’t smash when dropped from ten feet. Amazingly three out of the four groups, including mine, actually succeeded!

Then Lee told us we’d all been working well as a team, and that YHA often get job applicants to do the egg drop challenge at group interviews, to assess this. If he’d told us the relevance of the challenge beforehand I’d have been consciously thinking about how I performed, but by acting naturally we’d been unconsciously demonstrating that vital skill of asserting your ideas whilst listening to the opinions of others. That was quite a confidence boost.

Something that came across very strongly, mentioned by at least three people in separate sessions, was the value of UK travel. So many young people aspire to visit far-away places, not noticing the incredible beauty, wildness and culture of our own island. Having only been abroad once but travelled extensively in England, Wales and Scotland, that’s a message I’m passionate about spreading. And it’s also one of YHA’s core values. From Breaks For Kids to Young Champions, a vast network of hostels allows young people to explore places we might never have considered.

To find out more or view photos, search using the hashtag #YHAYouthConf on Facebook or Twitter. Posts about the Intercultural Youth Exchange and Theo’s pre-uni gap year can also be found on this blog!

“This week in Geesthacht was truly unforgettable…”